It was another solid night for Team Rocky Mountain ATV/MC-KTM-WPS, as round nine of the Monster Energy Supercross season made its only Canadian stop in Toronto, ON, inside the Rogers Centre. Blake Baggett put in a top five ride. After posting the third-fastest time of the day in qualifying, Blake Baggett used his track speed in his heat race to put on a hard charge through the field. Making aggressive passes on his competition, he secured himself 4th and a transfer spot in th

It was a wild weekend for Team Rocky Mountain ATV/MC-KTM-WPS, as the eighth round of the Monster Energy Supercross season made its way to Atlanta, GA, for one last race inside the famed Georgia Dome. Blake Baggett led the charge for Team RMATVMC as he scored his (and the team’s) first podium of the season. Blake Baggett started the day on the gas, finding the fast way around the Atlanta track and posting the fifth-fastest qualifying time of the day. He brought that speed into

Getting a handle on the track early on, Blake Baggett posted the 4th fastest qualifying time of the day. On the gas from the moment the gate dropped, Baggett would just miss out on the holeshot, rounding the first turn in 3rd. He rode solid, finishing 3rd and transferring to the main event. Baggett woudn’t get the start he needed as he rounded the first turn mid-pack. He had worked his way up to 6th place by mid race when he went down after hitting a slick spot on the track. 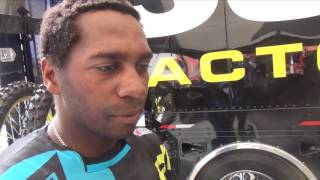 Yoshimura Suzuki Factory Racing’s Blake Baggett made a surprise appearance aboard his Suzuki RM-Z450 at the second round of the Lucas Oil Pro Motocross Championship Saturday at Glen Helen Raceway in San Bernardino, CA. Just four-and-half days after surgery to plate and screw his broken collarbone, Baggett originally thought he would wait until High Point on June 18th to return, but leading up to Saturday’s race in San Bernardino he felt good enough to go out and give it a sho

Blake Baggett underwent successful surgery on Monday to repair a broken collarbone sustained in the second moto at the opening round of the 2016 Lucas Oil Pro Motocross Championship last Saturday. Yoshimura Suzuki announced today that Baggett hopes to return at Round 4 of the championship at High Point on June 18. “There was a possibility that I might have been able to race this weekend,” Baggett said in a team statement. “But I was told that any fall could cause further the

In the first moto of the 2016 motocross championship, Blake found major success. He was ninth on the first lap before tapping into the power of his Yoshimura Suzuki RM-Z450, charging his way up to fourth late in the race. He then went on another charge after Eli Tomac, who had passed him earlier in the race. Blake would eventually make the pass on Tomac with two laps to go and put himself on the podium for moto one. Blake was prepared and ready to do battle in moto two. He wa